Fury At The Censorship Of The Net by Romy Alizée

On November 24, 2018 at 10.00am, I connected to Instagram to share one of my latest images, a self-portrait with a friend, and a long double dildo. I had taken special care to select a photo without nudity. Not out of fear of having it reported, but simply out of artistic choice. This photo was my last publication before my account was deleted a few hours later, without receiving any explanatory emails. I was no stranger to censorship; Facebook, the Big Brother of surveillance, had done the exact same thing to me just three years before. 72 hours later, after I publicly called out and gently challenged Instagram about losing three years of contacts, photos and message exchanges, I received an email from them. The moderation apologized for this error and invited me to reconnect and fully reinstated my account. Unfortunately, many others have never had this chance. They will never get their accounts back and will have to deal with the loss of all their work. In some cases, people’s account have been deleted multiple times after trying to »start over again » with new accounts, leaving them feeling more defeated than before. This experience has alerted us to the insidious cultural totalitarianism that governs this censorship.

ARBITRARY TERMS OF USE
In the span of three days I exchanged messages with many people concerned by this censorship; artists, photo models and sex workers who are connected through their work with the body or eroticism. These are mostly feminist artists who censor their images before posting them by either blurring the photo, or adding an emoji to block the prohibited body part or area.
Owned by Facebook since 2012, Instagram imposes terms of use that have less to do with what the law sanctions (pornographic exposure to minors, hate speech…) than with arbitrary and reactionary decisions. While sexist, violent and hateful images, coupled with homophobic, misogynistic or racist comments, abound on Instagram’s global feed, they condemned me, a feminist photographer and sex worker, without warning. The visual productions of large companies such as Playboy do not seem to be concerned about these restrictive measures, so I deplore a difference in treatment that is sexist to say the least. Facebook and Instagram are American companies, emblematic of a certain globalization. While they seduce users all over the world, the neutrality displayed by these media companies eventually unveils a neo-liberal and conservative reality. Therefore, in these spaces that operate on the self-representation of users, the control of bodies and ideas still prevail. Instagram’s lack of transparency is revealed when users report that their lingerie photos have never resulted in deletion, unlike images where their nudity is accompanied by political discourse. Is this the (actual) standard to be met? Is that why Playboy USA’s mainstream content is not being attacked? Or is it because the major image producers pay extra to distribute their content and are therefore customers of Facebook and Instagram?

FREE WORK AND EXPLOITATION
One obvious observation emerges from the exchanges with various actors concerned by censorship: we are no longer on Instagram really by choice; we are there because it has become essential to communicate and disseminate our work. We can create websites that will not suffer from censorship, but how can we promote them if Facebook and Instagram block access? In addition to censorship, these are obstacles to the professional development of artists offering so-called « problematic » content. These self-proclaimed social networks have a monopoly on online artistic distribution, so it seems problematic that they can exercise such abuses of power, excluding certain artists from their platforms on the grounds that they do not respect their policies. And again, in regards to erotic content, what « problems » are we talking about here? What’s bothering them so much? We artists share our work for free, which Instagram directly makes money from.
Presented as a broadcasting service, the reality is that Instagram’s existence depends solely on our content. This content represents time and work that Instagram does not pay us for. In this sense, it is interesting to talk about free labour, and invisibility in the same way as domestic work, which has never made housewives financially self-sufficient. As good capitalist companies, Facebook and Instagram know how to take advantage of the involvement of our audience. What about the distribution of these profits? Since Facebook and Instagram are private mediation spaces, and not public spaces that care about cultural diversity, user interactions have a commercial value and the « user work » must also be qualified as such so that our public can understand that we are all concerned. Because why would they sanction content that is desired, in demand and supported by an active community, if not to send a message that the content is deviant, that we as artists and users are deviant? It is our imaginations, and their political power, that are at stake.

BE GOOD AND SHUT UP
Finally, the discriminatory policy of Instagram and Facebook poses a problem in that it seems to target mainly women’s bodies or rather, some women’s bodies. In its new conditions of use, Facebook/Instagram prohibits nudity, scenes of sexual activity
even if they are not directly visible and reaffirms its puritanism by banishing everything that touches directly or indirectly on the notion of pleasure. The blur surrounding the banishment of nipple images is becoming clearer and once again it is women who are emerging vanquished from this exhausting war against the nipple. The female breast, responsible for all ills, is only allowed if it is buried in a child’s mouth, in case of illness, or if it is linked to an act of protest. This new mention raises questions: to what extent will Facebook acknowledge that there is « protest »? Many of us use our bodies as political tools and fight gender discrimination through our work (including ethical and feminist pornography). However, we don’t need to go out and demonstrate topless with a flower wreath on our heads for our activism to be recognized and validated.

To date, no man has complained about the deletion of his account linked to topless images, however, photos of trans men whose trans identity is considered female by Instagram are regularly reported and deleted. Sexist, transphobic… and fatphobic. The hashtag #fatkini (a hashtag of fat women wearing bikinis) has caused a lot of images to be deleted, even though millions of images of women with thin bodies posing on the beach have remained online. Is an algorithm problem to blame? Instagram ultimately only tolerates women when they wear lingerie and close their mouths (and of course at the same time they must avoid showing the undesirable content of body hair or periods). Women’s empowerment at Facebook headquarters doesn’t seem to be on the agenda!

Instagram’s problem is that by censoring too much of it’s users’ content, it is setting a standard that is light years from what the world is in reality, and subsequently sending a distorted message to its millions of subscribers. Where the diversity of our cultures, lifestyles and thoughts could meet, instead a sanitized world emerges where everyone eats the same, travels to the same places, where girls spend their time in bathing suits and where violence -unmoderated words and excluding images – is perpetuated. To achieve this, the methods used by social networks to clean up their platforms deserve attention: a recent documentary alerted us to the working conditions of young and underpaid workers whose job is to watch every image or video that violates the rules imposed by Facebook and to remove them. Those images are often very violent and the employees are forced to watch them entirely. A puritan Americancompany employing people of color, putting them in a harsh and traumatizing work environment, this is their recipe for quick and effective censorship.

We could choose to leave Instagram, to turn to other networks. But alternatives are scarce: Tumblr has just announced the removal of all « adult content » from their
« conciliatory » platform (thanks Apple). Patreon tightened its conditions in the summer of 2018. Some are going into exile, but there is a price to pay, at least for the artists, and above all, we think leaving is not the solution. We are also a part of the community that Instagram is talking about. The injustice that targets trans people, sex workers, people of colour, people with disabilities, queers, women and feminist artists is not tolerable. It is in total contradiction with a fight for equality between women and men. A fight that cannot be possible without inclusion and visibility.

Instagram, giants of the net, if you read this, know that texts like this one will flourish, we are sure of it, and then you will have to answer for this gender discrimination. Because injustice calls for struggle, and we feminists will never give up. 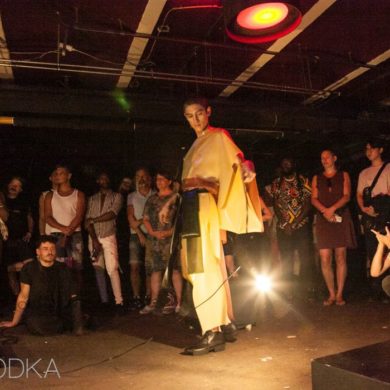 A queer + modern look on fashion
By continuing to browse the site you are agreeing to our use of cookies.