By Florentine Schlüter
In InterviewMusic

We’ve had a digital chat with the German underground star on the rise, please meet VALENTIN!

In her latest track „Drogen nehmen“, VALENTIN captures Berlin’s crowd on point in a tongue-in-cheek way, with a meaaaaan production and distiguished sound that will make you dance. Now in Corona times, she is sending “Digital Hugs” to the world in an interactive video featuring fans and friends. In today’s society it’s so important to shine a light on the fact that she does it all herself and empowers others. She’s got that effortless coolness, is hard-working and an absolute girl boss. The guys wanna be her, the girls wanna be her. We think she will conquer the world in 2020. Or whenever this crisis is over, she will make it work.

What were your earliest significant memories about music (e.g. listening to a song with your parents, visiting a concert, watching someone play an instrument..)?

This is difficult to say because I grew up in a family of musicians and I was surrounded by music all the time. But I still have my first recorder today and my father’s lessons had a huge impact on me. I think I have learned to work productively with others despite a close interpersonal relationship. Nowadays, I even prefer working with people I already know quite well.

How did that turn into you making music now?

For me, music was like a second language that I learned as a child. I communicate through it. Here I can express on a different level what is going on inside me. Listening to music is like a good conversation and being surrounded by music and art is like having friends and family around me.

„For me, music was like a second language that I learned as a child. I communicate through it.“

Your latest song is „Drogen nehmen“. When did you first have the idea for the song and how did it develop? Can you give us a little insight on your creative process – how does it start and build up?

I rarely have an idea for a song. It starts with a drum and then I add everything as if I already know the song. This was exactly the same process for “Drogen nehmen”. The kick that you hear at the beginning that runs through the whole song, basically was the origin. I wanted it to pop. I still remember visiting my mother-in-law and I said to my husband, “I have to work. Can I record my clarinet on the balcony? “ Of course I could.

„I still remember visiting my mother-in-law and I said to my husband, “I have to work. Can I record my clarinet on the balcony?“ Of course I could.“

I admire that you are completely self-produced. Which advice would you give to young female musicians that want to learn how to produce themselves?

For years it was a struggle for me as a singer that I was looking for beats or musicians who could understand and implement exactly what I wanted. Mostly it was men. Because unfortunately there are still very few women producing, and I was the kind of girl who said: “I can’t produce, I can’t use music software, can you help me?” I hear that from so many women nowadays and it reminds me of myself back then. Please (!) never say that you can’t do something! We have to fight the stigma of it being a men’s software. We can all use the software if we put our minds to it. Don’t compromise. Get you someone who can show you the basics of music software (e.g. Ableton or Logic), or watch a bunch of tutorials. You don’t have to learn more than the basic rules first. Everyone should operate the program with their own methodology, so that you create authentic music. Don’t be afraid to learn new things. This program really helps you implement exactly what you want without compromise. You’ll get there!

„Please (!) never say that you can’t do something! We have to fight the stigma of it being a men’s software. We can all use the software if we put our minds to it. Don’t compromise.“

The clarinette is your signature instrument – When did you first start playing it and why? When did you rediscover it?

My father always tells the story that he was standing in the kitchen and heard a clarinet tone from the music room that didn’t sound like a beginner. It was the first time that I picked up the clarinet. From that day (I was around 9 years old) it was my instrument. My father gave me lessons, a year later I won first prizes at “Jugend Musiziert” and at “Tonkünstlerverband” only to quit two years later. All I said to my parents was “I don’t feel like it anymore”. I still credit them so much for just accepting that. So I rediscovered the clarinet once again for myself today and use it in a way that suits me.

„I rediscovered the clarinet once again for myself today and use it in a way that suits me.“

You have played FUSION Festival 2018 while being pregnant. So I am really curious: HOW WAS IT?

It was extremely HOT. 40 degrees and an overnight stay in a tent. It was tough physically, but at least we were in the family area which was pretty relaxed.
Fortunately, my stage was also a boat (the Anarche), so it was well ventilated. It was definitely one of my best performances so far. The crowd was super happy and had a great vibe.

Do you have a dream place where you would love to perform have your music played and why?

I am currently staying at home, but once we make it thru Corona I would like to play in China. I have currently written a track in which I speak out against racism towards Asian-looking people, unsolidarial behavior but pro positive thoughts and love in times of crisis.

„I have currently written a track in which I speak out against racism towards Asian-looking people, unsolidarial behavior but pro positive thoughts and love in times of crisis.“

And what is your plan for the next year – or is it better not to have a plan?

I had a rough plan, which obviously is not happening as planned now. So we had to rethink and we created a music video for my current track „Digital hugs“ together with as many people as we could get on board for the idea. Everyone can send love from their home (wherever that may be) into the world <3

Thanks Valentin! Check out her Spotify and play her FUSION set to dive into a sweet and melancholic nostalgia of festival season. 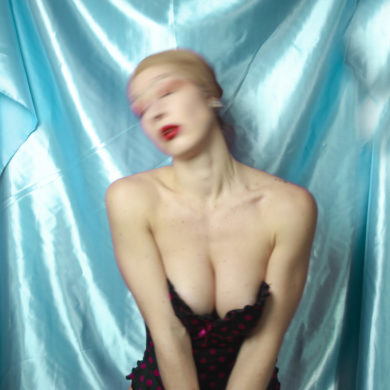 Dorothy Esteem
By continuing to browse the site you are agreeing to our use of cookies.