In her moving images, Ana Cayuela Muñoz captures the tiny gestures that reveal dreams of another, freer world. At the same time, they show us a deeply personal view of love relationships taking place under different portents. The result is a series of complex photographs that depict a many-layered social structure – and a reality that is already in the process of disappearing.
Ana Cayuela made this series The Emotional Power Of Capital in Habana. Using her status of “Western woman”, she analised how she’s been perceived by the others. The methodology of work was about sharing photography; “learning by doing”.
The photographer made workshops with guys, which have, as only option to travel outside of the island, to marry a foreigner.
The Series explored the effects that economic restrictions have had on human interactions and on people’s private lives. The desires and hopes that have grown out of Cuba’s economic position stand in stark contrast to the tourists’ independence and presented to the artist a special kind of encounter brimming with romanticism, exotic curiosity and power.

“My pictures aren’t mine, they are the product of the union of human beings in social networks. I am a photographer with a disposition to live in companionship with others, rather than in isolation. At the same time I would risk every single part of my life for a picture; my limits are where the integrity of the others starts. To have a camera in my hands is a kind of responsibility that represents freedom to me. My topic is people, the closer we become the larger my passion grows.“ 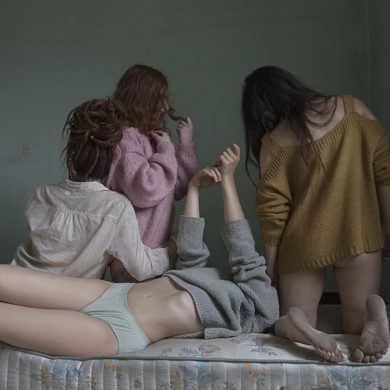 Le Scapigliate
By continuing to browse the site you are agreeing to our use of cookies.