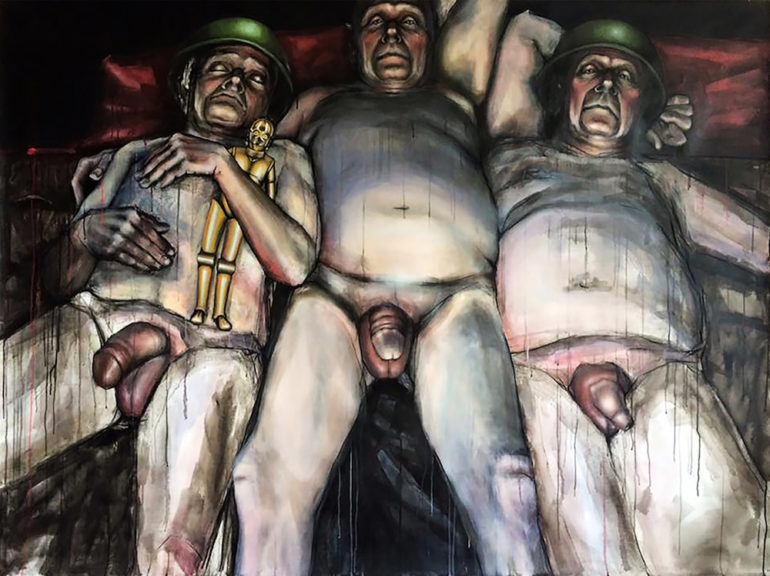 Anastasia Obaregbe is a contemporary artist based in Berlin. The conceptual basis of her work is formed by emotions, ideals and their utopia. The central theme is always the human being, whereby she is interested in illuminating as many facets as possible. Anastasia is dealing intensively with gender-specific role patterns and attaching great importance to aspects such as identity, dignity, strength and vulnerability.

“It fascinates me, to combine opposing components thus create fields of tension (the tension between good and evil, strength and weakness, beauty and decay). My works have a clearly recognizable feminist approach. The role of women in society, their self-understanding, their identity and the reassessment of the definition of beauty form the core theme. An exceptional aspect about my work approach is my simultaneous consideration of the role of men. Emancipation was originally a movement of both, women AND men.
Feminism, however, has become increasingly radicalized and has declared masculinity to be the enemy. This point of view ignores the fact, that men are also substantially affected by patriarchal structures and thought patterns (the myth of the eternally strong man, real men don`t cry…). Emancipation was/is necessary in every respect. However, we must allow men to become part of it. Genuine equality can only be achieved in this way.
Another aspect of my work, which includes gender issues, is the catchword diversity. Diversity is of course good and desirable in any case. However, a detailed concentration on differences will inevitably lead to polarization. Instead of proclaiming diversity, I strive to elaborate the lowest common denominator. The fundamental common ground of human being (summarized in the universal declaration of human rights).
The demand I have on my art is to make a clear political statement. Against any form of racism/ homophobia/ misogyny/ misandry and every other form of disparagement. Through my philosophical and scientific approach, I am acting as catalyst, transforming current events and tendencies into contemporary art. My works are an invitation to critically examine specific themes and a call for self-reflection.”

Safe Space by Hélène Mastrandréas
By continuing to browse the site you are agreeing to our use of cookies.