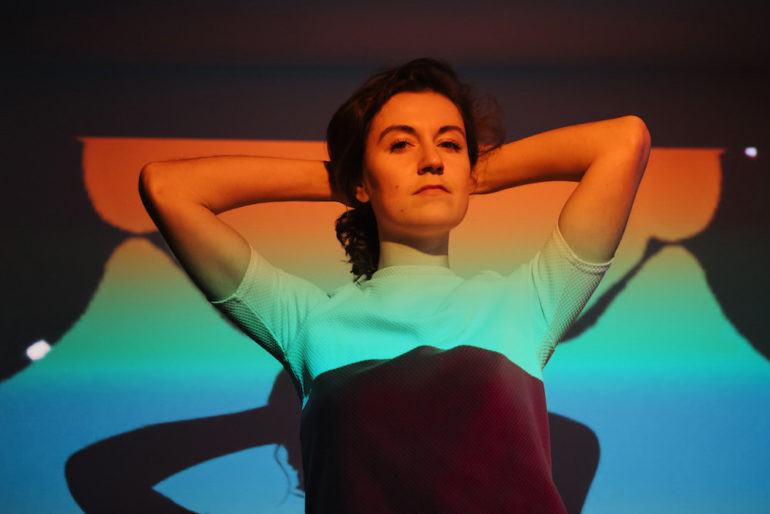 A chat with Tessa Rose Jackson aka Someone, about ‘ORBIT’ her cosmic five-track EP and Augmented Reality experience!

Someone is a multi-disciplinary artist who celebrates and explores creativity in all its different forms. Having always harboured a love for art of all disciplines, she discovered a joy in crossing borders between genres, collaborating with other artists and putting ego and image aside to focus on simply ‘making’. The result is a constant flow of work that, although diverse in format, is held together more by mindset. The music on Someone’s EP ORBIT combines psych-pop hooks played on gloopy guitars and shimmering synthesizers with Someone’s airy, mellow vocal that juxtaposes the constant energy driving the tracks forward. Furthermore ORBIT is a new way of releasing music using art and interactive technology. It consists of a cosmic music EP, an Augmented Reality app and a live show rolled into one. We talked with Someone to learn more about her fascinating projects. Read our interview below.

“I chose the name ‘Someone’, for its absence of gender. Because I do feel a lot of prejudices around being a female musician.”

Hello Tessa! Tell us what’s the story behind your mysterious artist name ’Someone’?
Before I chose the name Someone, I was releasing pop music under my own full name. But I ran into a terrible writer’s block and couldn’t bring myself to write music for at least a year. You know how sometimes, when you’re too close to something, you can’t really make out what you’re seeing? Well, I felt that way about my name. Too close. Too intense. No breathing room to explore, to experiment, to create. Around that time I also discovered my love for creating visual art and decided I wanted to bring art and music together, at all times, focusing fully on the creative material itself, and not around the persona of the maker behind it. And so, I needed a name that conveyed that, a name that distanced itself from persona, gender, style, preconceptions. I wanted to delay people’s expectations, letting them experience the material with an open mind and thereby allowing the material to evolve and grow according to my own creative process. To me, the name Someone says: Don’t worry about who I am. Focus on what I make, and how it makes you feel.

As a multidisciplinary artist, you’re exploring creativity in diverse forms, through music, art, popup exhibitions, live projections, and sound. What brought you to music in the first place?
I always liked music growing up (especially musicals, to be honest! Julie Andrews for president.) But when I was 13 I started singing lessons and it was like a penny dropped. I had always been a pretty awkward kid, kind of an oddball, but when I sang I felt confident for the first time. Like I finally had something that was my thing. And then the singing led to songwriting, and to my love of the guitar. I grew up playing classical piano which was cool, but when I first recorded a guitar I was like: Wow. This sound inspires me. This is the instrumental answer to my voice. That inspiration just grew and grew and it all just developed from there.

Your lyrics are relatable and deep…what inspires you to write?
So many different things. I find movies very inspiring. Sometimes a scene can get stuck in my head, and won’t stop bugging me until I’ve written a song for it. Like: I want to translate this scene into sound. The film ‘Magnolia’ has inspired quite a few songs, actually. Sometimes, often while I’m cycling through my hometown of Amsterdam, a phrase will just pop into my head. No idea where they come from, probably a distilled little nugget from a conversation with a friend or an overheard phonecall on the train from ages back. And sometimes, other songs. I admire other songwriters and am always trying to learn from them. So when a song truly touches me, you know that magical feeling you get of: ‘Wow, this song is about me!’, I try and figure out how that songwriter has done that. And then try and achieve that same effect with my own story. Because in the end, the strongest lyrics are the ones that feel like they belong to everything at some point in time.

What matters most to you, lyrics or music?
Goodness. To me, they are equal. They bolster each other to create a stronger, more powerful message. I used to always say I didn’t care about lyrics, though. I was obsessed with musical language, how strong melodic hooks work and figuring out cool harmonic tricks. But over the past years, I’ve become totally overwhelmed by the power of lyrics. Maybe it’s something that comes with growing up? I don’t know.

“For each track, I created an artwork that reflects the vibe and the lyrics of that song in my abstract visual style. Using my free app the artwork will come to life in augmented reality, and the song linked to it will begin to play.”

As a female artist, how does your experience influence or shape your work?
I’m becoming more aware of how my being a woman is important in my work, actually. One of the reasons I chose the name ‘Someone’, for example, was its absence of gender. Because I do feel a lot of prejudices around being a female musician. People seem to assume your music will be sweeter, assume you are a singer, not an instrumentalist, assume you work with a producer, assume you write mostly about love. Being a woman, I always felt a strong urgency to be self-sufficient. To be my own producer. To learn about production, to not be pushed into that stereotype of the female singer who gets a bunch of dudes to do all the technical stuff. Because that’s what people expect. But there’s no reason for it! Women are kick-ass producers, we just have an absence of role-models. But I feel that’s finally starting to change, and I’m super excited about that. Festivals are starting to book more female fronted bands and there’s more and more female artists out there who really know their stuff and are unapologetic about being in control. I love it.

You released a new EP called “ORBIT” which comes with an augmented reality app… A new way of releasing music using art and interactive technology. Tell us about it, What does it consist of exactly?
For each track, I created an artwork that reflects the vibe and the lyrics of that song in my abstract visual style. Using my free app called “Someone presents: ORBIT” the artwork will come to life in augmented reality, and the song linked to it will begin to play. You can interact with the art, rearranging the different elements or building new ones through tapping and swiping, as the lyrics appear in mid air around the frame. It’s so fun to see people’s reactions – it triggers a playfulness and joy that is just so awesome to see. So ORBIT can be bought as a pack of interactive artwork cards, or as full sized art prints to hang on your wall at home!

What prompted you to create a new way to experience music?
I was looking for a way to release ORBIT in a way that fused the music with my art, to create a full experience. And not only that – I wanted it to be interactive, to really engage people. It was a reaction to our fleeting way of consuming music, the way we skip through tracks on Spotify because we don’t really allow ourselves the time to take a chance on new music (I am just as bad, myself). Sometimes I feel we supress our natural sense of adventure because we feel we don’t have the time. And that’s a terrible shame, so I love to try and tickle that out of people!

We live in a more and more digitized world, What is your view on the interaction/relationship between humans and technology?
ORBIT is all about that, actually. The reason I chose the word “orbit” is because of the effect I feel social media has on us. Constantly being online, seeing each other (or seeing the side of each other that we have chosen to share), but the contact is superficial. We’re not really connecting, we’re just scrolling through our stylized online portfolios. Like planets, orbiting around each other, always from a distance, always moving.
But technology is also great! We can be in touch with friends and family all around the world, share our experiences, create new exciting stuff. That’s why I wanted to involve smartphones in the new release. We just need to tone it down a bit, to find a more mindful place for smartphones in our lives. I love technology, but it’s all about the balance between it and the real, natural world.

“The world is a pretty weird and confusion place right now, but I think it’s very important to keep a positive mindset and not let it push us down. People are good, life is confusing, it’s okay.”

What message do you want to convey with your music and art?
I took a look at my lyrics recently and discovered a pattern within ORBIT. “I can’t remember how to talk to you”, “where do we go from here?”, “I don’t know why I can’t pull it together”. No coincidence there, haha! At the moment, I guess I feel unsure about the world, about my future, about our generation. And it really helps to put those feelings into words and combine with an optimistic, colourful vibe. And then share it with others. The world is a pretty weird and confusion place right now, but I think it’s very important to keep a positive mindset and not let it push us down. People are good, life is confusing, it’s okay.

What is next for you?
I’ve got some shows lined up with my band, in the Netherlands and in France, so I’m very excited about those. I hope to travel with the full ORBIT experience (that’s a live show, and the art exhibition in one night) more, so I’m working on setting up more shows! And meanwhile, I’m in the studio all the time writing for the next album or EP. 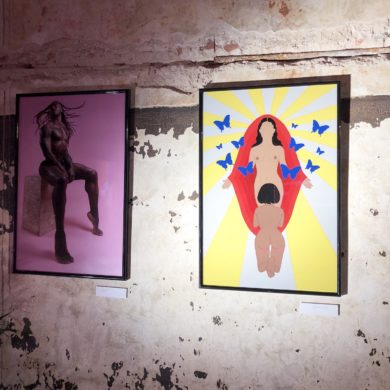 Queer Club
By continuing to browse the site you are agreeing to our use of cookies.