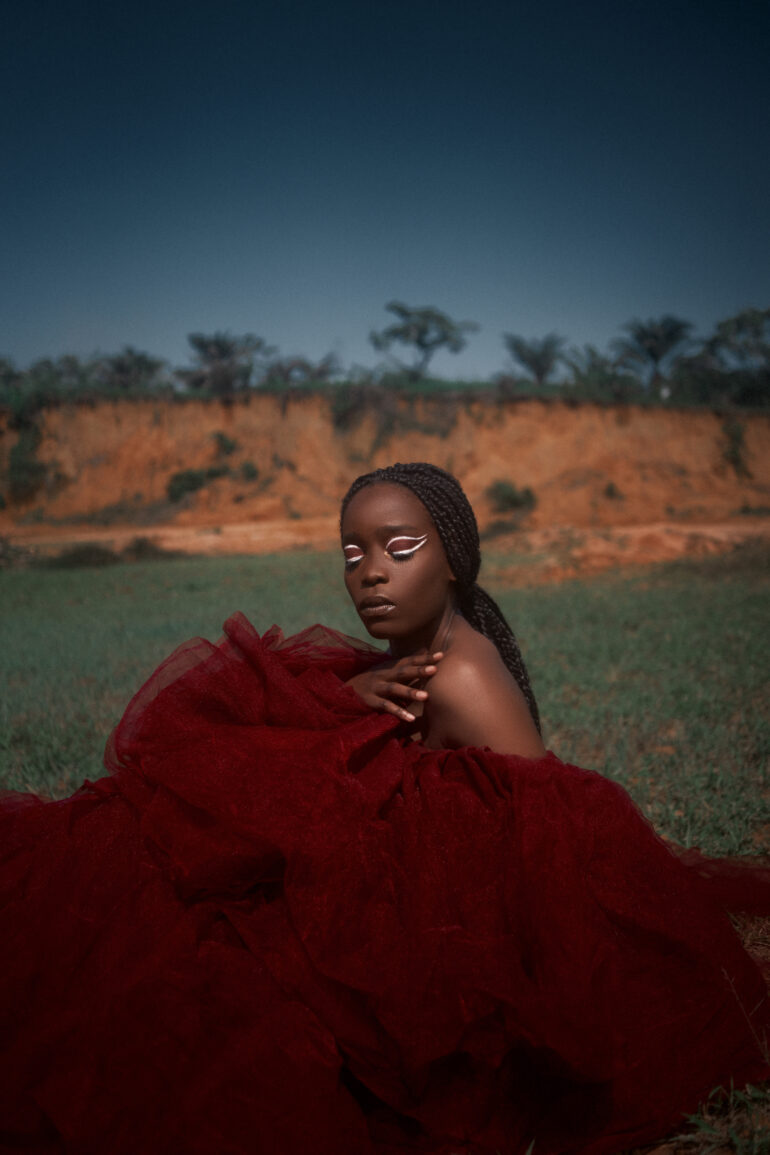 IRMA’s new EP “Douala-Paris” is an ode to multiculturalism & freedom.

10 years after the release of her first hit “I Know“, the divine IRMA is back with a new EP Douala-Paris – OUT TODAY!

At 33, “feeling like a stranger everywhere“, the singer-songwriter got the urge to reconcile her roots with a very personal record, produced between her native country Cameroon, and her home, France. Advocating for diversity rather than division, and singing in french for the first time, Irma celebrates her double culture, and everything that makes her who she is. Breaking free from all codes and expectations she used to twist herself into, the craftswoman of sound now authorizes herself to live, to repress nothing, to be weak, to be feminine, to be masculine… We had a chat with the inspiring musician. Meet Irma, a new model of freedom.

Looking back in time: What were your earliest significant memories with music and how did you decide to make your own?

I’ve been into music for as far as I can remember. My earliest significant memory though is stumbling upon this TV show called “The American Dream” telling the childhood of Michael Jackson, when I was 5. It was the moment when he sings this mesmerizing song at church called “Climb every mountain”, accompanied by a piano, and his parents decide that he’s going to be part of the Jackson 5. I remember precisely what I felt at this moment; overwhelmed with bliss. I thought “that’s it, that’s what I want to do in life”. The minute after, I told my parents I wanted to learn piano.

To reconcile your roots, you went to record your EP both in Cameroon, your natal country, and France, where you grew up – Was it the first time working in Cameroon? How was that experience and what was the main feeling while creating this new music?

It was my first time working in Cameroon indeed. For a long time I considered my natal country as my “resting island”. No work allowed there. But recently I felt the urge to go back and reconnect my music to the influences I had while growing up there. It was a beautiful experience. As if I found back old pieces of my internal puzzle that I had forgotten. I reconnected with my africanity and also my femininity. Working in a male-dominated environment had led me to develop very controlling, solitary and workaholic habits as a form of protection over the years. Welcoming artists from here and there into my world, embracing their artistic visions and letting them nourish mine felt very unsettling and very liberating too.

Working in a male-dominated environment had led me to develop very controlling, solitary and workaholic habits as a form of protection over the years.

‘Douala-Paris‘ is like a big patchwork of all your influences. If you could describe what you wanted to say with this EP in a few words, what would they be?

“Make peace with myself” would be the words that describe this EP for me. Make peace with every single aspect about myself, the bright and the dark. The African and the westernized, the feminine and the masculine, the adult and the child, and so on.

Tell us about your creative process; It seems like you had no limitations –playing around, sampling instruments, objects, kitchen tools, producing anywhere you could in the studio or even in the plane– You collaborated with various artists from Douala, Bangangté, Paris and London. As a creator involved in all aspects of production, how was it collaborating with other creatives and how did it change your process?

The creative process of this EP was very liberating because it felt like an exploration. As if I was digging in different aspects of my creativity without limitation or auto-censorship. At the beginning of the first lockdown I sat in my studio with my instruments, opened the microphone, turned on the synths and just started having fun. Because let’s face it, we needed to have fun during this period. And then at the end of the lockdown I felt the urge to go back to Cameroon and very naturally started to look for artists to collaborate with. It totally changed my creative process as I’m a control freak when it comes to my work and it led me to let go and trust that other people visions would only bring more depth and material to mine.

I realised how being vulnerable was the bravest and hardest thing to do.

For the very first time you sing in French. Was this a conscious decision or a natural step for you? And how did the collaboration with multi talent & author Marion Seclin come about?

Singing in French was a very natural step for me. My musical path led me closer and closer to my roots. On my previous projects I felt that what I had to express would resonate better in English maybe because I was more focused on the sensations and the moment. Now I’m more concerned about how to come back home internally speaking, not geographically. What is it that makes me feel whole. So I’m naturally reintegrating these aspects that I had put aside for a while. And singing in French is one of those aspects.

I always felt deeply inspired by Marion’s natural gift for writing. She masters the art of arranging words and she’s a true storyteller whether it is orally or on writing. I can listen to her tell any story for ages without feeling bored. She knows how to pick and use words to express any emotion. The texts she writes on her Instagram page always sounded like lyrics to me because I could hear their music and rythm on top of appreciating their beauty. So out of nowhere one day I just decided to make an arrangement around one of her Instagram texts that resonated with me in many ways, and it felt perfect. From then, we decided to collaborate on several songs of this EP, her writing the text and me composing the song.

As women we have been trained to judge ourselves horribly, to even hate ourselves when it comes to our bodies, our sexuality, our power etc…

This record brings a lot of your vulnerability… Did you aim to use the music-making in a more emotional & intimate way?

Exactly ! I come from a background where it’s not a good thing to be vulnerable and express your emotions. It’s seen as weak, it’s unsettling for others so you just have to repress them. After years of chronic depressions, panic attacks, anxiety, I decided that I had to honor every single one of my feelings and emotions which meant accepting to be vulnerable. I also realised how being vulnerable was the bravest and hardest thing to do. I’m not going to lie, I’m not quite there yet but I guess my music making process is just following through this personal path.

You said at one point in your life you were feeling like a “stranger everywhere”, “twisting yourself in the funnel of the western male gaze”. And in the song LES CLONES, you talk about the fear of being rejected. How did you manage to liberate yourself from these feelings & inner conflicts?

If I’m being honest I still feel terrified by rejection. The feeling of ‘not belonging’, ‘not being accepted’ still scares me. But, I managed to step back and realize we all feel this way, and that most of the time it’s about us, our own fears and not “them”. Is our society systemically racist and sexist? I do think it is. Will the fear of rejection keep making me twist myself to fit in places where I’m not welcome as I am? Not anymore. Being scared led me to dramatic situations, where I betrayed and hurt myself immensely. At some point, I decided I did not want to feel that way anymore. Again, I’m not there yet and probably will never be totally liberated from the alienation that is the “look of others”. But with a lot of introspection and also a lot of love from people who did love me for who I was, I’ve somehow managed to keep these external voices telling me what I should be, where they belong: outside of my inner world.

I feel femininity is actually the real power, the one that unites, not an artificial one that creates fragmentation.

What advice would you give other women, and people in general, in the journey towards self-acceptance?

Throughout my journey I realised it was about trying the best I could to reach that place of non judgment of myself. Accepting means accepting the good AND what I consider to be the bad within me. I realised I could not be in a better place mentally without accepting and bringing love to the aspects of myself that I judged negatively. As women we have been trained to judge ourselves horribly, to even hate ourselves when it comes to our bodies, our sexuality, our power etc…And until this day we are carrying the fights and oppressions of generations of women before us, in our mental structures. Realizing that these mental habits of non-acceptance were not mine but became mine over the years was the hardest thing. I went through a phase of rage, facing the injustice of having to take responsibility to heal something I did not asked for in the first place. But when I eventually let go, and accepted this responsibility, I felt so much liberation, love and power within myself.

For the video of “Va t’en” your stylist Fredy Manyongo made you wear ultra feminine outfits, that you were not used to before. How was that experience? and What does femininity mean to you?

This project definitely reconciled me with my femininity. I grew up rejecting almost every feminine social construct because to me it felt like a burden. Being feminine as the society wanted women to be, felt like something that would prevent me from being who I wanted to be. Though, I was not at all interested in taking part of the masculine energy dominated world. The oppressive dynamics, the power struggles, the conflicts, all these artefacts of power were not where I wanted to be either. At some point I realised how I had denied a huge part of myself, trying to reject this ‘male gazed femininity’. So then I decided not to obey these injunctions by just being myself, and reclaiming my own femininity and masculinity without rejecting one or another. I felt so much beauty and power working with Fredy And wearing these ultra feminine clothes. They were both very sophisticated and traditional and thus a way to also reclaim my own africanity. Today, I feel femininity is actually the real power, the one that unites, not an artificial one that creates fragmentation. To me, femininity is love, it’s creation, it’s tenderness and bravery, in other words it’s humanity. And I feel that today’s world lacks femininity.

What do you want people to take away from this Ep?

Honestly If people just feel good when listening to it, my work’s done! 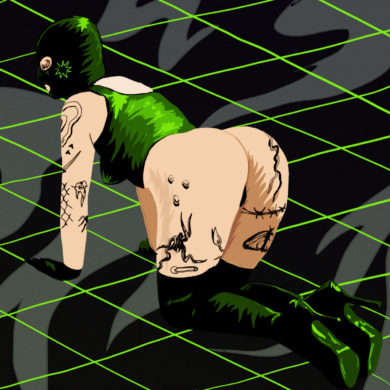 Kamil Jauregui
By continuing to browse the site you are agreeing to our use of cookies.