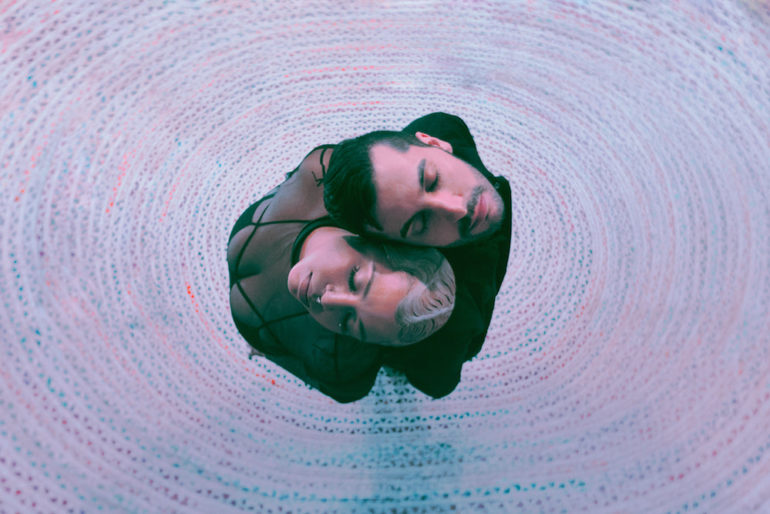 Interview: Via Rosa from DRAMA

DRAMA is a Chicago-based dance duet, formed by Via Rosa and producer Na’el Shehade. Together they create hyper-danceable melancholic electro-pop. Quite a unique genre they call HAPPY-SAD MUSIC. And we can’t get enough!

Their song “Hold On” has been on loop on our home playlist for a while now and we’re so excited for their forthcoming debut album « Dance Without me » to be released on February 14, 2020, via Ghostly International. The album is a refined collection that recasts romantic tragedy as moonlit self-acceptance, as heard on previous tracks “Gimme Gimme” and “Nine One One“. Their sound is somewhere between Chic-House and Jazz, clubbing and soul, it’s a very delicate mix between 2 creative individuals, re-inventing a solid vision of what music should be in the first place, a strong bond between human beings, telling one honest and personal story, in words and music. We are pretty sure DRAMA, is gonna be around for a long time! We had the great pleasure to chat with Via Rosa, to learn more about her musical experience, influences, and vision… Meet this talented and inspiring badass woman!

“for me music was just a way of dealing with being/feeling isolated.”

Hi Via! Nice to meet you. I read that you were a passionate Chef before. Tell us, what got you into music and when did you realize it was the right path for you?
Hello hello! Yes, I went to two culinary schools, but music has always been a part of my life. Both my parents are musicians but I didn’t start making anything until I turned 14. I was a bit of a trouble maker and once almost got sent to juvenile hall (jail for young people). Instead they grounded me for 6 months so I locked myself in my room and taught myself how to make beats using Garage Band. I never took my music seriously ‘cause for me it was just a way of dealing with being/feeling isolated. I’m scared that I don’t know what I’m doing everyday. I get anxiety when I see chefs working ‘cause I think how different my life would be if I had stayed in the kitchen. I honestly sometimes question if music is the right path for me. I’m a strong believer in portals though and all I can say is a very special one opened the night Na’el and I had our first session. I just knew I’d regret it for the rest of my life if i didn’t jump through it and see what happens.

You grew up in Austin, Texas and moved to Chicago in 2010. What is your relationship with Chicago and how has the city influenced your music?
My mother was born here, her family owned a friend shrimp restaurant. They had the best shrimp on the South Side! Chicago has played a huge part in who I am as an artist. I came here at 20 years old and I didn’t even really get started till 24. So for 4 years Chicago just kinda threw me in the metaphorical  “you can do this” oven. I suppose I came out a fluffy cake and Na’el is helping make the icing for it. Can honestly say that if it wasn’t for the people I’ve met in this town I’m 100% sure I wouldn’t be making music.

I just want people to live their best life, honestly. To hear this music and say to themselves “I’m amazing and goddammit I’m gonna be the love of somebody’s life one day.”

What’s the story behind ‘DRAMA’? How did you & Na’el meet?
A mutual friend Jean Deaux introduced Na’el and I and insisted that we work together. We were both busy and didn’t know each other. At first he was like “meh” and I was like “I only work with my guys” but a year later when we finally had a session. From there it took off and Na’el invited me to join his band. So we dropped everything else and became DRAMA.

Tell us about “Dance without me”. Love, Romance, Relationships, Heartbreaks, are themes you translate in your lyrics; A mix of vulnerability, resilience but, somehow, hope is not out of the equation. What do you want people to take away from this album?
I just want people to live their best life, honestly. To hear this music and say to themselves “I’m amazing and goddammit I’m gonna be the love of somebody’s life one day. All I gotta do is be the best me.” At least that’s just what I hope they get from it.

“…To me, if you’re not a feminist, you’re just a fucking asshole.”

Feminism is getting a lot of attention lately, and part of the cultural conversation more than ever, especially with internet and online activism… many musicians have embraced the messages tied to feminism. Do you consider yourself a feminist?
Yes, of course. Absolutely! Although when I was younger I was told a story about how feminism was started by political parties to get black women to abandon their husbands. So for a time I associated feminism with the idea that it’s just another way to divide human beings into sub groups to keep us distracted from the evil man behind the curtain. But these days I know that there are so many positive things attached to the movement. I think all women are feminist by default. So to me, if you’re not a feminist, you’re just a fucking asshole.

As a woman, how do you stay strong in an industry / society that constantly drive us towards self-doubt?
I doubt myself every day. I’ve also been very lucky to work with amazing men who never let me talk down on myself and really support me and my art. I’m very blessed considering it’s usually the men in this industry who are like “do this” or “wear that” or “be like this” or “you should lose weight.” I think a support system even if it’s small, is really important. Without it you just fall into the dark black hole of endless negative thoughts.

Do you think art & music can solve problems in the world?
What kind of problems are we talking about? There’s so many!!! I mean art and music give perspective and transcend minds to another level of consciousness. I don’t know if I think the art itself solves anything outside of the mental or emotional discomfort. I think good art sparks the conversation for change but it’s hard for me to believe that something so pure could solve the problems made by man. It’s going to take people actually giving a damn to do that.

“A support system even if it’s small, is really important. Without it you just fall into the dark black hole of endless negative thoughts.”

Music business has drastically evolved with digitisation, and people don’t consume music the same way than 10 years ago. Are you optimistic for the future of music?
The Music business terrifies me but I’m also very happy with where it is right now. I think it’s really cool that so many bands/musicians can co-exist and survive off of their art. There were too many gatekeepers before with labels signing artists and shelving them to make sure their golden goose had no competition.
I think everyone has the right to make music. We also all have the right to choose what music we like to listen to. So hopefully the industry stays on the path it’s heading which is “there’s room for all of us” versus “there can only be room for a few”.

What advice would you give to other aspiring musicians out there?
Just keep making your music and don’t be afraid to put it out. Show everyone what you can do without them but know you can’t do it alone forever. You’ll need to find a team you trust and grow with together. It’s seriously the only way.
Also don’t get discouraged by all the “overnight sensations” out there. The ones who actually last the longest have most likely been working at it for years.

Who is your DREAM collaboration?
Robyn or the Lebanese singer Amir Diab! I also wouldn’t mind hearing Drake on the same record as me. Word on the street is he steals peoples hits and then makes them better. So like, why not me? Aye? Honestly I could live the rest of my life making music with Na’el and I’ll be just fine.

“I think everyone has the right to make music. We also all have the right to choose what music we like to listen to. So hopefully the industry stays on the path it’s heading which is “there’s room for all of us” versus “there can only be room for a few”.

Any dope female artists that inspire you right now?
Yes, so many… Orion Sun, Arlo Parks, Mereba, Mahalia, Kaiit, Amber Mark. I could go on and on.

What’s next for you & DRAMA?
Our debut album, Dance Without Me, drops on February 14th which is coincidentally Valentines Day! Beyond that you can expect more and more music from us. Did I mention we’re going to make some more music!? Lots more music. Like, forever. 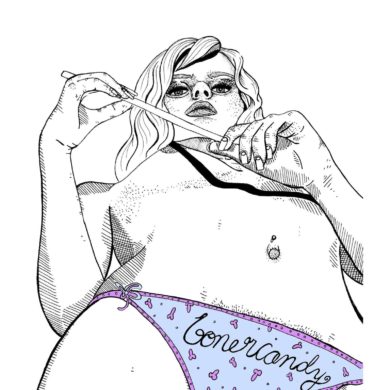 i-D Germany “Digital_Luv”
By continuing to browse the site you are agreeing to our use of cookies.