By Sonia Alcaina
In Music

Glüme: On softness as a weapon, the finesse of the heart and the multiple dimensions of “The Internet”.

From The City of Angels to the delight of our senses, the singer, actress, composer and tragic queen Molly Keck, known professionally as Glüme, has shared with us some words and reflections about raw feelings, the strengths and the weaknesses of the heart, and her creative process in the current dystopian state of affairs. Her debut album ‘The Internet’ is due to be released on April 30th via Italians Do It Better and we can’t wait to listen on repeat to her electronic-pop music full of retro-futuristic sounds and hypnotic Lynchean atmospheres. Turn on the music, close your eyes and enter Glüme’s Black Red Lodge universe.

Being into acting and singing since a very early age, how did you decide to make your own music?

I wanted to create a world that I grew up thinking still existed where you tap danced your way into an MGM contract and you’d end up singing a Gershwin song written for you. So, I thought I’d make my own stories and visuals that felt like that magic to me. I wanted to tell stories and connect with people too because I was very isolated growing up and that seemed like a way to reach people from whatever planet I felt like I was stranded on.

In an interview for Bizzarre you admitted to being an advocate of feelings and raw emotions, (despite the advice of your doctor). What is the main feeling that drives you to create music? Would you describe it as a restorative or destructive feeling?

I fall in love fast, I hate goodbyes, I don’t understand when people live only for themselves and I don’t understand when people project an idea that they’ve created onto you rather than being interested in getting to know someone. To me, it is fascinating to get to know another person but to some, I suppose it’s inconvenient. I’ve had trouble with all of that but with heart disease, you don’t really get to scream or cry without chest pain so you have to send input through multiple filters before it sends off any adrenaline. I never thought I’d be a perfectly controlled person emotionally but I guess when it feels like a gun is to your head you remain calm…and just put it in a song.

I wanted to tell stories and connect with people too because I was very isolated growing up and that seemed like a way to reach people from whatever planet I felt like I was stranded on.

Prinzmetal, the heart disease that you have learnt to live with, has certainly played a major role in your everyday life. How would you say that has influenced your creative process?

Mornings are hard and as soon as the clouds part I feel grateful to have a chance to do anything. I’ve never written so much in my life. I get excited to do what I love once my body says go.

In your song “Body” you relate metaphorically to a very vulnerable moment after an episode provoked by your heart disease, do you often hear your body talk like in the song? What does your body tell you?

I wrote that song as a message to someone else. I was constantly in and out of the hospital at the time and there was a lot of anger in this person and I felt like can’t you see and hear my body is too weak for this chaos? I can’t yell back because of it but isn’t that in its own way louder? And, so I’d try to focus on celebrating life. The sound of the wind moving through the trees reminding you that you’re still here can drown out any boy if you’ve been in an ICU too long.

You have the word “Soft” tattooed in your knuckles, how do you think that softness and vulnerability could be acts of resistance and even lead to liberation?

Softness as a weapon, yeah. I think a lot of people assume that if you’re not loud or controlling or very alpha that you are weak. I am very strong and I don’t need to scare people into believing that or really care if people assume one way or another. But, I think being honest with yourself and good to others and gentle with things is a really cool choice when the world offers your heart so many chances to harden. I only see that leading to a lack of life.

In one of your Instagram posts, you quoted Audrey Wollen and her Sad Girl Theory. Do you think that fragility is your feminine superpower?

Yeah, totally. Growing up it was all girl power with this energy only a 13-year-old could embody and sometimes you just feel tired. It’s a great feeling when you have the energy but I don’t think women should be expected to join the cheer squad of existence to make a point that they can do it too. I noticed on the other hand a lot of women in the ’90s if they wanted to make the impression that they were in charge often felt pressure to be very masculine about it, which is great in a gender expression way if that’s how you feel but should not be mandatory to express that you are equal to a man. I can wear a dress that looks like it belongs on a doll, cry to a stupid song in the car and still hold my own in a very meaningful way without having to meet someone the way they’re used to being overpowered. Those aren’t weak moments to me at all.

I’d try to focus on celebrating life. The sound of the wind moving through the trees reminding you that you’re still here can drown out any boy if you’ve been in an ICU too long.

What fascinates you the most about the figure of Marilyn Monroe?

Our childhoods often can leave us feeling paralyzed like we lack tools and she always reminded me that you can be that bitch, the most iconic woman in the world, and you make your own tools as you go and you might just find a superpower in you from having to dig that much deeper than others might have had to.

Do your pets Theodore, Cleopatra, Norma Jean and Gidget help you, apart from keeping your heart happy, with your creative process? Which songs in the album are created in the company of them?

All of them. I felt so bad for Johnny Jewel trying to get the noise out of my vocals. If your cat starts meowing to my album it’s likely hearing mine somewhere.

…we lost a lot of life and adventure to write about. I encourage everyone to get vaccinated and go experience as much as they can.

What lessons have you learned as a musician during lockdown that could help other creatives in difficult situations?

Well, before lockdown I had spent about a year in bed in and out of the hospital and it was a struggle to go downstairs when I lived downtown and get tea each afternoon with my heart pain at its worst when I wasn’t on the right meds. That was my goal each day though. I honestly didn’t notice the change except having to wear masks because I was stuck inside for so long already. I didn’t think it got to me but the other day I ran into my friend on the street and she yelled she was vaccinated and I ran and jumped into her arms which I didn’t expect to do and I realized how quiet it has been. I think it’s probably helped creatives stay focused but we lost a lot of life and adventure to write about. I encourage everyone to get vaccinated and go experience as much as they can.

How do you think The Internet these days could be used as a tool to empower women?

You can be whatever you want to be! I can’t be the full-throttle human I was when I was healthy but I see a version of me online that is and so in some internet dimension, I’m living my truth. What does Lady Gaga say? “And truthfully the lie of it all is much more honest.” 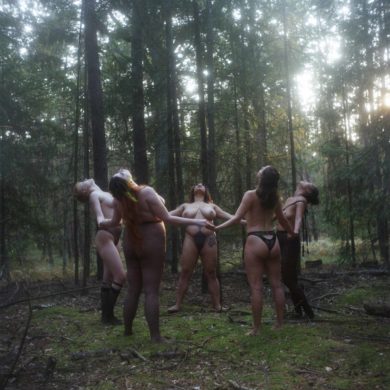 Women Circle
By continuing to browse the site you are agreeing to our use of cookies.