interview: BE THE BEAR

A chat with Emerging Swedish pop sensation Be The Bear, as she releases a vibrant and sparkling new single “Mermaid”.

Be The Bear is the nom de plume of Swedish artist and producer Christina Wehag. She’s a one-woman music machine who fuses a bubbly yet clever pop sensibility with an avant-garde persona reminiscent of fellow Scandinavian pop mavens Bjork and AURORA. The alias Be The Bear derives from Wehage’s childhood fear of bears and recurring cold-sweat nightmares. Christina reclaimed her nightmares by adopting the totem of the wild bear and creating a powerful musical persona for herself.
“Mermaid” marks Be The Bear’s fourth release. The new single was written as a love song for her friend who was in a psychiatric hospital at the time. Her hope with this song is it will be one more step towards ending the taboo surrounding mental health. Read our ITW to learn more about this inspiring musician.

Hi Christina! What’s the story behind your artist name BE THE BEAR?
It started out as a mantra, written on my bedroom door. I was having recurring nightmares about a bear breaking into my house, night after night. The more I ran from it the more it grew, while the house was falling apart around me. I often have trouble with insomnia as it is, so it was all really difficult. I came to realize it was my subconscious me telling myself I needed to face my fears. There was this big “bear in my house” that I wasn’t dealing with. What scared me most of all was also the one thing that was most important to me: music, and being an artist. Writing, producing, recording my own songs. I thought, I need to ”bear up” – so I decided to completely dive into the process and make music my life. I carved “Be The Bear” into my door, told all my friends I was going to be an artist, and the nightmares stopped. It seemed the natural choice for my artist name. A reminder to keep challenging myself.

How did you first get into music?
I have always been into music, it was the most important part of my life, as early as I can remember, but I didn’t realize it was going to be my life until much later. I’ve always been writing songs, improvising melodies on my daily walks in nature. I grew up on the west coast of Sweden, surrounded by woods and water, so I spent a lot of time wandering outdoors, just singing, screaming my head off sometimes. I couldn’t play any instruments, so the music was all in my head, my own landscapes of sound. I got my first guitar on my 14th birthday, and I remember crying my eyes out. I called her Luna. Nowadays I play some piano and can produce too. Improvisation is still my main source of inspiration. It’s like tapping into a never ending flow.

What is important for you to convey through your music?
I just want it to be honest. My songs are my legacy, you know? They mean everything to me, and I really put all of myself in them. Memories, dreams, stories and philosophical ideas.

“Equality in every way -feminism- is extremely important. Anything else seems completely insane to me.”

Tell us about the new track “Mermaid”, how did it come about?
It’s a love song I wrote to a close friend of mine who was checked into a psychiatric hospital at the time. I wrote it as a way of sending my love, saying “you’re not alone” and that I would always be there. Unconditional love. It was such a terrifying experience, I’ll never forget how helpless I felt. “Mermaid” wasn’t recorded for a long time after, it was a gift to my friend – and it just wasn’t the right time to share it with the rest of the world. I do hope people like it, it’s one of my personal favorites.

Do you find it harder to be a female musician?
That’s a really good question. To be honest, I’ve never felt like I have any less right than any man does when it comes to creating music, so even though it happens all the time that men underestimate me, or assume that a man must have helped me if I’m successful with something, I take great joy in doing as much as I can on my own and proving them wrong. Most of the time I’ve been positively received, I think. I’m a very passionate and bubbly person, and I’ve done most of my business meetings on my own, meeting with the big A&Rs (mostly men as it looks right now) – I love being involved in every part of the process and I’m very picky about who I work with. It’s vital that I feel my team and collaborators respect me and are willing to work with me rather than above me. It doesn’t work otherwise.

In the current social and political environment, many musicians have adopted the feminist label….Do you consider yourself a feminist?
Absolutely, I expect to be treated equally to any man. Equality in every way -feminism- is extremely important. Anything else seems completely insane to me.

“I’m really worried about the climate crisis and how little is being done. I would love to see everyone taking more responsibility for all the awful things we have done to the garden that is our home, that we’re dependent on for our survival.”

You’re also the founder of the record label ‘Loud Attic Records’. What prompted you to start your own label?
I have my own recording studio in central Gothenburg, which means I get to meet quite a few young musicians, singers and bands. Sometimes it’s just too tempting not to get involved with their writing process and artistic struggles. I love writing songs with and for others, and it’s hugely inspiring to produce something completely different from Be The Bear. Sometimes I write a song and I think: this would really suit a male voice better, or as a duet, and I will offer it to one of the artists I work with and develop it with them instead. The label was a way for me to use the tools and contacts I’ve made over the years to help newcomers get an easier start than I did.

How do you feel about Social Media in relationship to artistic communities? Would you define it as a blessing or a curse?
To be honest with you I’ve really struggled to find my way with social media. I want to use it as a kind of artistic diary, ideally – but I’m quite a private person, so it’s a challenge. I think I’m slowly learning how to make it my own – I do enjoy following my favorite artists and I understand the potential of social media. I think it will end up being like with my music: that I’ll constantly keep reinventing myself.

What big change would you like to see happen in the world?
I’m really worried about the climate crisis and how little is being done. I would love to see everyone taking more responsibility for all the awful things we have done to the garden that is our home, that we’re dependent on for our survival. The current global rise in far-right politics depresses and disturbs me daily. I can’t believe it, to be honest. It’s difficult for me to take in that “even” in Sweden -which is supposed to be one of the most socially equal and progressive countries in the world- now has a racist party in government. It appalls me that as a society we aren’t prioritizing people that are fleeing war and famine for a new safe home in Europe. I’m ashamed we are voting for parties that look on people in need with disgust. That includes the million animal species facing extinction because of climate change. I really hope Greta Thunberg and the global demonstrations she has inspired will end up forcing the politicians in power to act. It’s now or never. I’d love to be positive about our future again.

What’s next for you?
I’m writing so many new songs at the moment, I’m extremely excited about them – I can’t wait to record and produce them and finish my debut album. As soon as I can, I want to go on tour and finally meet the beautiful people who are following my music. Thinking about them and traveling the world is what gets me up in the morning. I love being on stage, there is literally nothing in the world that compares to the feeling you get being connected to a sea of beautiful people in unison. It’s otherworldly. 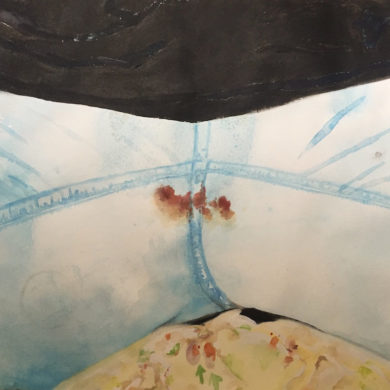 Nikita Gurnani
By continuing to browse the site you are agreeing to our use of cookies.